Brian surprised me on Valentine’s Day with a trip to Sweet Pete’s Candy for dinner and sweets.  Sweet Pete’s was featured on the TV show “The Profit.”  They have two levels of candy, a dessert bar, chocolate factory tours and more.

The kids got a special delivery from Edible Arrangements – Thanks Papa D and Beth!

Nana and Papa made cupcakes with the kids Saturday night while Brian and I were out.

On Sunday we met Nana and Papa at the park for a walk.

First, an update on my Meniere’s Disease.  I still experience dizziness everyday but hadn’t had a full blown vertigo attack in almost 7 months until a few weeks ago when I had 5 vertigo attacks in 3 days.  The disease just wanted to remind me that it’s here to stay J Since then I’ve been experiencing more dizziness than before.  The good days are great and the bad days are horrible.  It’s been a rough few weeks but I’m trying to push through.
I have eliminated all processed foods from my diet, eating low sodium, gluten free and 95% organic.  I’m trying to do grain free but that takes a little more work and food prep/planning.  I’ve lost over 15lbs. just in diet alone.  I’m also using essential oils.  Brian jokingly refers to me as his “hippie” wife.  Since using essential oils we haven’t been to the doctor since November.  If you are familiar with this blog you will remember how many times I’ve posted about the kids being sick, doctors appointments, etc.  Essential oils have been so helpful.  Addison used to have Molluscum for over 2 years and after 3 applications of Lavender it is gone and hasn’t returned.  Enzo has it and his is taking a little longer to treat but after 5 applications he only has 4 dots left.
My work has temporarily allowed me to work from home full time.  In a couple months I will be back onsite three days a week and work from home 2 days a week.
The kids are doing well.  Addison really is a different kid since she had her tonsils removed.  She still has her sass but her behavior has done a 360.  She is enjoying gymnastics.  She did cheer this year but didn’t like it so we know not to enroll her next year.  She has decided this year for her birthday that she doesn’t want a party with friends and instead wants to go to Disney.  Looking forward to that.  She really wants a cat…to the point of begging on a regular basis.  I told her that as long as we have Gizmo we probably won’t get one…Brian would rather get her a rabbit.
Enzo is doing good.  Some days we see that 3 year old independence rear it’s head but for the most part he is such a sweet soul.  He is obsessed with sports and loves to watch bull riding on the iPad.  He always says “I want to watch Angry Bulls.”  Thankfully the PBR is coming to our area soon so Brian promised him that we would go.  He loves horses as well and asks every weekend if we can go to a farm to ride.  He is excited for the Super Bowl tonight and loves the Patriots like Daddy.  Thanks to Papa D and Beth for sending him a Patriots jersey.  He wears it often 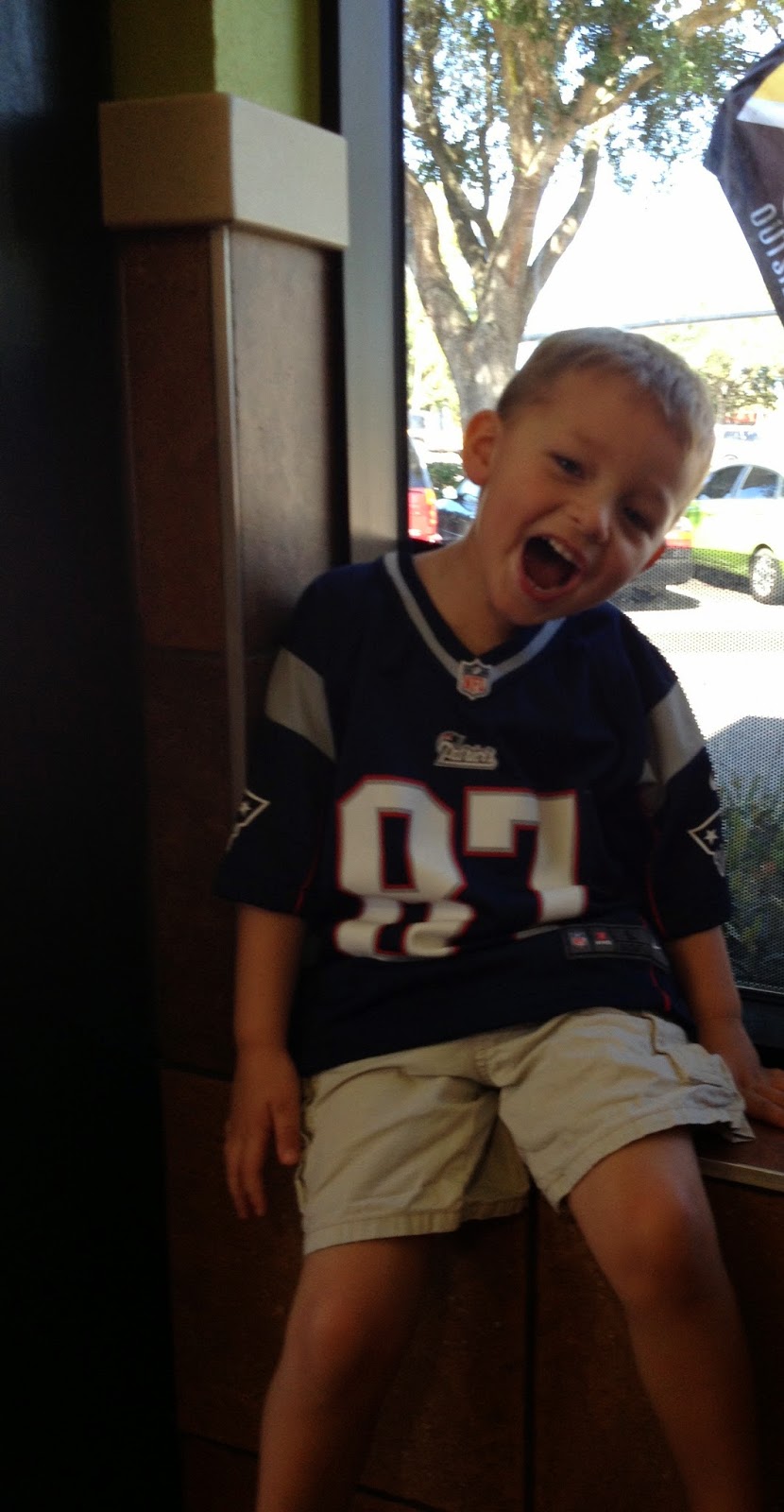